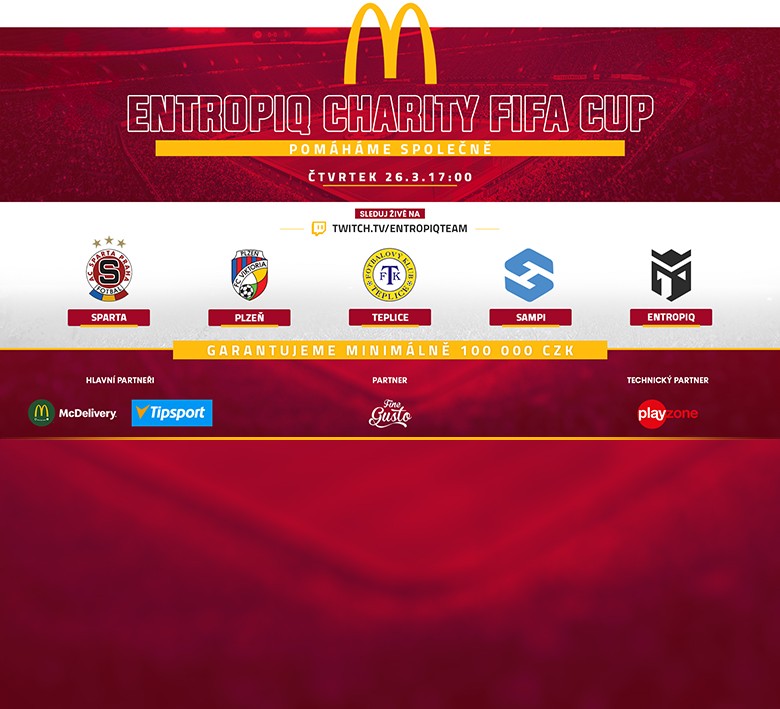 We're in This Together: Entropiq Charity FIFA Cup

Fighting the spreading of COVID-19 connects the nation as well as the Czech esports teams.

Team Entropiq decides to help in the battle against the unprecedented coronavirus pandemic by hosting the Entropiq Charity FIFA Cup to raise funds for the department of infectious diseases at Nemocnice Na Bulovce hospital. The earnings will be used for purchase of ventilators and other much-needed medical material.

Joining forces with McDonald's, Tipsport, and Fine Gusto, Entropiq and its partners guarantee to contribute at least CZK 100,000 for the cause.

"We are glad that we — together with our partners McDonald's, Tipsport, and Fine Gusto — can do at least this much to support our medical staff and other personnel in the first line of defense. We understand the seriousness of the situation, and therefore we decide to use the popularity of the top Czech esports teams and football clubs to help where it's needed," said Ondřej Drebota, Managing Director of Entropiq.

The virtual football tournament will see five players compete on Thursday, March 26, with the action kicking off at 5 p.m. CET. Ambassadors of AC Sparta Praha, FC Viktoria Plzeň, and FK Teplice will be joined by domestic esports heavyweights Sampi and Entropiq.

The black-and-green colors will be represented by Štěpán "RIIJK" Sobocki, who's lately been on fire. RIIJK notched a perfect 30-0 record in the last weekend league to finish 54th worldwide.

Fans will have a chance to help in raising funds by donations during the live stream, which will be running on Entropiq's Twitch channel. A full 100% of each donation will go to the Na Bulovce hospital.

The contest will boast an entertaining commentary provided by experienced sports announcer Michal Jinoch from Nova Sport along with football players Lukáš Vácha and Jakub Podaný.

"I follow our esports scene, and I used to play FIFA, so it will be nice to do a commentary now when real football has been put on hold. I'm a fan of PlayStation and games," revealed Vácha who won two Czech league titles with Liberec and Sparta.

"I'm happy to support an event that will entertain and help a good cause. I hope we'll watch a lot of great virtual performances," said Jakub Podaný, currently a player for Bohemians Praha 1905.