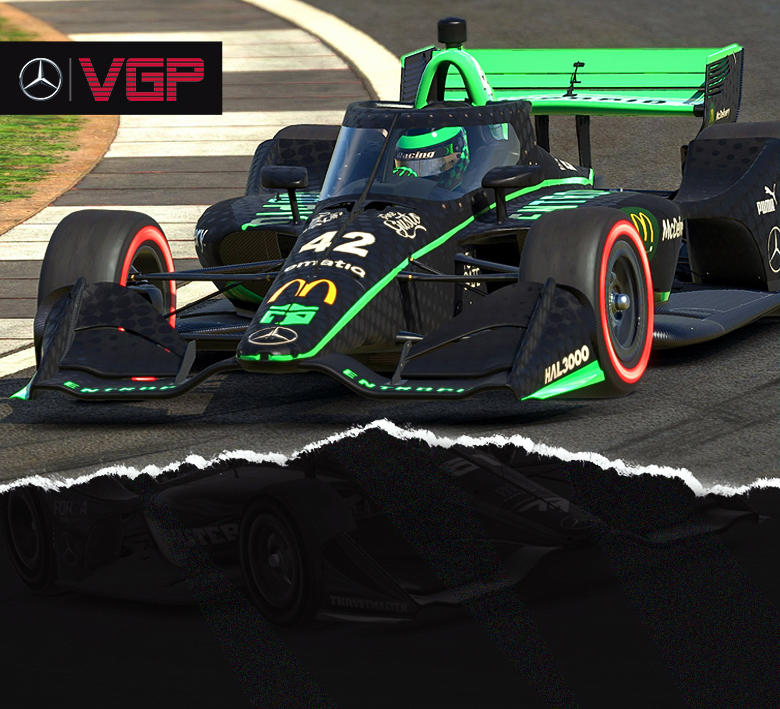 Second half of this year's Mercedes-Benz Virtual GP is starting. GT3 cars will be replaced by much faster formulas, specifically model Dallara IR18, which you might know from the American IndyCar series.

The single-seaters will make their debut, as they did last year, at the Silverstone circuit in the UK. Entropiq drivers Lukáš Podstata and Michal Matoušek will not be missing behind the wheels.

The Dallara IR18 cars will offer a completely different driving style, speed, downforce and most importantly a very precise and detailed damage model where the slightest contact will mean trouble.

Silverstone is a classic not to be missed on the calendar and it was this track that hosted the inaugural event with the single-seaters last season, back then still in team racing. However, this circuit is extremely demanding on the formulas and will be a real challenge straight away. How will it turn out? You can watch it on Tuesday 15 June from 19:00 online or live on O2 TV Sport.

Entropiq have reigned supreme in this year's VGP so far. Lukáš Podstata is the leading man in the championship and the black and green colours are also basking on the top spot in the team championship.

We haveasked both of our drivers what they expect from the second half of the season and how they prepared for the formula and the start on the legendary track.

How are you looking forward to the Silverstone? How would you approach this legendary circuit from a driver's point of view?

To be honest I'm really looking forward to Silverstone. I've already had good results at this circuit from my earlier days in simracing. I believe I can sell my experience in iRacing as well.

Instead of GT3, you'll be driving formula cars in the second half of the season. How are you getting to grips with the new car? How much have you driven in practice?

Acclimatisation really took a couple of hours. Of course, you need to do a lot of laps, figure out the strategy, but so far Michal and I are sticking to the plan and we are happy.

How are the formulas different compared to the GT3 cars?

From my point of view, the formulas are much harder. The driver has to play more with the throttle and brake and change his driving style several times during one stint.  I have some comparisons for that, but it's not appropriate to present that before 10 o'clock :D

Will the change in the fleet affect the results or can we expect the same faces at the front?

So far we have run three test races organised by VirtualGP. I don't want to give too much away for now, because we don't want to reassure or scare our opponents :-))) There will definitely be a few changes. But we believe that we won't be affected by the slump.

How are you looking forward to the Silverstone? How would you approach this legendary circuit from a driver's point of view?

I'm really looking forward to Silverstone. It's the first time I'll be racing on this modern configuration, the track has a great rhythm. For us simracers, the circuit is relatively easy as we don't have to face brutal congestion in parts like Maggots and Becketts.

Instead of GT3, you'll be driving formula cars in the second half of the season. How are you getting to grips with the new car? How much have you driven in practice?

After the not-so-good last few races with the GT3 cars, I honestly didn't know what to expect from IR18. But I'm pleased to say that I've grown to like the car a lot and I'm really looking forward to Tuesday's race. I've got something like 500+ laps under my belt so far.

How is the formula different compared to the GT3 cars?

I wouldn't be afraid to say practically in everything. The biggest difference is the throttle application and the associated tyre management, which is many times more complex than the GT3 cars. I can't reveal more details to my rivals in terms of know-how :-))

Will the change in the fleet affect the results or can we expect the same faces at the front?

One particular phenomenon was repeated during the test drives. Individual mistakes of drivers from the front positions. I expect a very interesting and perhaps unexpected podium line-up especially at Silverstone. I think it will have a major impact.