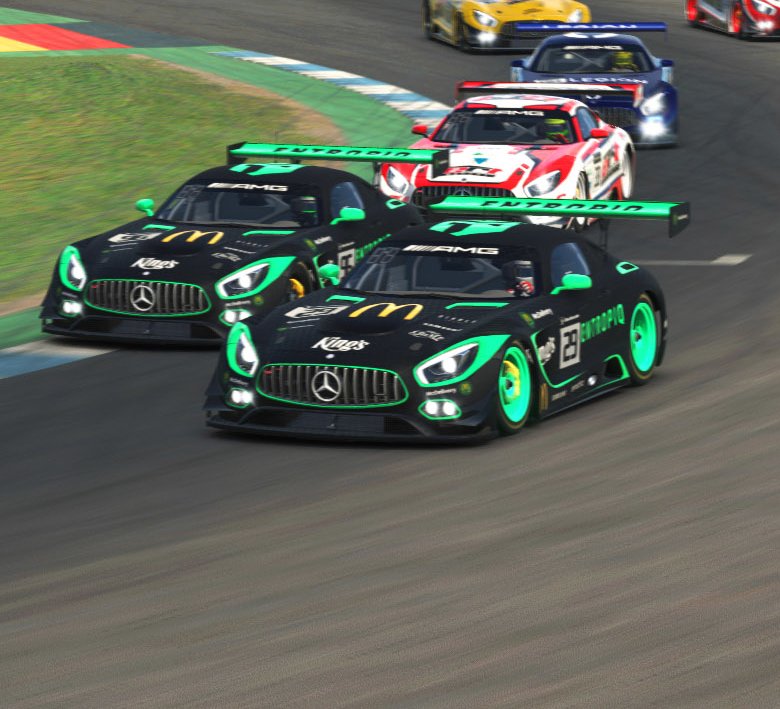 Mercedes-Benz Virtual GP 2022 season is halfway through. Last race with GT3 category was dominated by Martin Štefanko again. Entropiq drivers took the most team points thanks to third and fourth place.

The sixth race of the season was very quiet, unlike the previous "wilderness" at Donington. In the qualification, the favoured foursome of Lukáš Přáda, Martin Sirotek (EIQ), Martin Štefanko, and Lukáš Podstata (EIQ) lined up behind each other at the front.

The fleet start was without any major problems. TOP3 kept their positions, Lukáš Podstata got a knock to the rear of his car and dropped three places, but even with a damaged aerodynamics he managed to return quickly. But this time it was not enough to fight for the top positions.

On a difficult track, where overtaking is very difficult, the order on the top positions did not change. It came down to the pit stops.

Compared to his rivals, Martin Štefanko saved more fuel, completed one extra fast lap, could also refuel less, and he took the first place. The order lasted until the finish.

"From my point of view I fulfilled my goal, I wanted to finish on the podium," commented Martin Sirotek on the Hockenheimring. "Overall it was more or less faultless race, but you have to be focused, there is always a risk of a collision."

"The pit change didn't surprise me too much, I knew from the start that Martin was saving a lot of petrol behind us. I tried to save the tyres myself to push at the end, but Lukáš Přáda was aware of it, keeping a safe distance."

After the half of the championship, six GT3 races, Lukáš Podstata and Martin Sirotek are 3rd and 4th in the drivers' standings. Entropiq hold third place in the teams' standing, and the black and green would like to attack the title in the second half of the season. Six races are set to be contested in Formula One Indycar. The first race after the summer break comes on 16 August at Silverstone.

"I'm quite looking forward to it, the formulas are a lt more fun after the last update," Sirotek concludes.