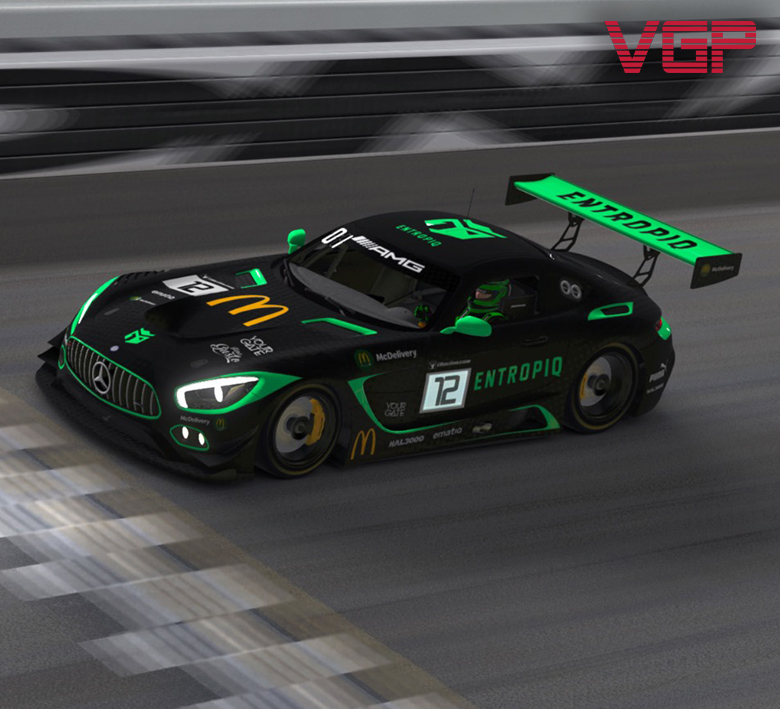 After initial race in Italian Imola, where Entropiq’s Michal Matoušek and Lukáš Podstata took third and fourth place and black and greens were leading the teams standing thanks to that, Daytona came around and with it another surprise finish. Podstata won on the famous Florida’s circuit and Matoušek lost the second place just before the finish line.

Entropiq drivers were unstoppable since the qualification, where they took the two first places on the starting grid. In the race they were battling with the light-blue Mercedeses of ESET with Martin Sirotek and Lukáš Korený behind the wheels.

ESET took the lead in the beginning, but Entropiq showed a perfect strategy and thanks to overcut in boxes, Podstata and Matoušek took back the first and second places.

They were leading the race until the final round, until the last few metres. Podstata won with a significant lead, but Michal Matoušek lost on the finish line with Martin Sirotek, who was pushed by his team colleague.

First and third place only confirmed the dominance of Entropiq, which secured its first place in teams standing. After two races, Lukáš Podstata leads the championship!

"Hard race in US Daytona brought fruit in the form of premiere victory in Virtual GP.

Qualification was pretty wild and every team wanted to get the best possible position on the circuit. I with Michal Matoušek managed to utilise mistakes of our opponents and took the first line on the starting grid.

The race was truly dramatic. I knew that lead is not an advantage on this circuit and I was glad that Martin Sirotek decided to attack and gain the lead. After that Tomáš Korený got in front of my Mercedes AMG GT3 and could focus on saving the fuel and keeping the distance to TOP2.

I managed to save fuel for two rounds during the first stint, which in the end gave me the lead back with a comfortable lead of 3 seconds. I then kept steady round times and focused on not doing anymistake.

Unfortunately, disappointment came in the last corner, where we were already enjoying the first two places with Michal for team Entropiq. Unfortunately, Martin Sirotek with the help of Tomáš Korený made use of the draft and Michal lost his second place by the margin of a few thousandths.

A big thank you belongs to Michal Matoušek, with whom we were perfectly prepared and wasn’t it for the third place, the result would be ideal. We still lead the teams standing though and I sincerely hope that we’re making Entropiq very happy.

What’s more, this result greatly motivates us to work even harder to keep the hot pace!"

VGP series continues in three weeks on Tuesday again with a race in Belgian Zolder.