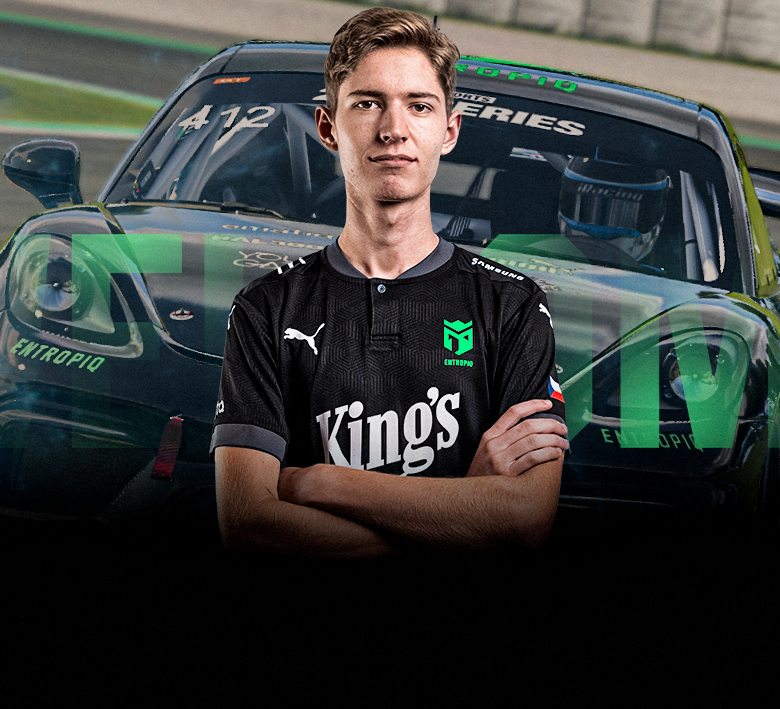 We welcome the second driver to our virtual paddock before the second half of the racing season - Martin Kadlečík. Welcome to our world! The first race under the black and greens colours for him will be Virtual GP Silverstone on Tuesday, 16 August at 19:00 CEST.

Hey Martin, let's take it from the beginning. How did you get into racing, both live and online?

I started autocross at the age of five, and it gradually evolved to faster and faster cars. On top of that, I've always been into various computer games since I was a kid, so ideally I combined my interests in sim racing. However, I didn't really start to get serious about virtual racing until about 4 years ago, when I started to train and drive in various leagues.

You'll have to explain that to me. How do you drive autocross when you're five?

They are such small buggies, not very strong, but the races are nice and a good experience for small pilots in the future. I remember my kindergarten teacher asking me what I was doing on the weekend, and I told her I was racing a buggy in Nová Paka. She thought I was driving remote control cars :-) but I had a real buggy, a big hobby since I was a kid.

What successes have you achieved so far?

I can say that I've been pretty successful. I've won a championship in pretty much every category I've driven in on home soil, about six or seven in total, and I've added three Central European championships in the last few years.

Back to sim racing. What games have you tried?

I've tried almost everything, but I've been most interested in Asseto Corsa Competizione and more recently iRacing, which is a bit more expensive, but in my opinion it's a much more realistic and sophisticated simulator.

And your virtual achievements?

I was very competitive in the Czech Sim racing Series in Asseto Corsa, where I came third, for example, behind Michal Šmídl.

In the G-Challenge, again in Asseto Corsa Competizione, I won the Czech part, then I advanced to the international part, which was supposed to take place in Las Vegas, but because of the Covid-19, everything was online.

The international part started with the qualification for the main final. There were three races, only three riders advanced, in the first race I finished second, but in the second one I got hit in the first corner and in the third one I had no chance to make up the points.

🏎 Before the start of the second half of the racing season we welcome a new driver Martin Kadlečík to our virtual paddock.

Welcome to our world! ⚫️🟢 pic.twitter.com/3TNSuTkYv2

When did you switch from Asseto to iRacing?

I started trying iRacing about a year ago, I liked the Porsche Cup, which I drive quite often, the multiplayer is great. The races are ranked by rating and I automatically drive with opponents who are similarly fast, and it's always interesting.

In the Mercedes-Benz Virtual GP you'll be driving for Entropiq in the IndyCar formula in the autumn. What do you think of the single-seater?

I've been driving it for about 14 days, it hasn't quite sunk in yet, the formulae are very fast, I prefer slower and more technical driving, but I'll adapt. We'll see at Silverstone.

How do you see your chances? You're completely new to VGP.

I've tried free practice with the others and I expect a balanced race, it will depend on setups, saving tyres, fuel...

Were you surprised by Entropiq's interest?

A lot, but only in a positive way. I've never been approached by a team this big before, and I'm looking forward to working with them.

What do you think of your teammate?

Martin Sirotek is a top teammate, he has a lot of experience, we help each other, we work together, we have only known each other for 2-3 weeks, but I think we already have a friendly relationship.

Could you compare Asseto to iRacing?

The iRacing has a better physical model, the car behaves properly on curbs, it has the right grip. In Asseto, on the other hand, if I, for example, step on the gas pedal, it understeers a lot, which is not the case in real life, but otherwise the traction control and ABS works, in iRacing the damage model is a bit worse, sometimes it reports contact without touching.

Overall, both games are comparable, but I prefer iRacing at the moment.

You have racing experience, can you compare a simulator with live driving?

There are some similarities, for example when we go wheel to wheel, it gives me a lot for real life racetoo, but the perception of speed is completely different, you worry more about the car on the track, there's a lot of money involved, in sim racing it basically doesn't matter, you crash, restart and keep going. Logically, the weight is different, the congestion...

You are currently competing in live circuits of the International Twingo Cup? How is it to drive a Renault Twingo?

It's one of the slowest cars on the circuits, but on the other hand it's the best wheel-to-wheel racing when there are five of us side by side, you can't compare it with other races at all. The speeds are only around 130 km/h, top speed maybe even 140, but we don't slow down that much into the corners, and you have to send it in. It's got a five-speed, but it's barely even in fifth. :-)

Do you train on sim racing before real races?

If I can find a track, I always try it. It's great to try to learn the track before you get there. We do have free practice sessions, but it's always better to know ahead of time how the track goes.

I also look at the onboards from older races and learn from other racers, where to brake, etc. when I first ride that track.

How are you looking forward to VGP Silverstone?

It's my favourite track. I'm expecting some great battles, and I'm looking forward to racing for the Entropiq team, who I want to thank for the awesome opportunity to show my skills. It's a new experience for me, plus I know I'll be going up against some very experienced "aliens" in the starting field, so it's a great challenge as well.

The 2022 Mercedes-Benz Virtual GP Championship returns on Tuesday, 16 August, with the second half of the season in formulae. This year, they will make their first appearance at the Silverstone circuit in the UK, where once again the best drivers on the Czech and Slovakian scene will gather.

The first half of this year's Mercedes-Benz Virtual GP 2022 season offered a lot. Unbelievable races at high pace, attractive with unexpected twists and turns. Over the summer, however, there have been some huge changes to the composition of the entire starting field, and it's fair to say that much more than just the car used is changing with the arrival of the formula. Also coming this year is the Dallara IR18 from the American IndyCar Series.

Martin Štefanko in ESET colours is leading the championship with 138 points. The closest to him is Lukáš Přáda, the driver of the ERT Racing Team with 117 points. In third place is Lukáš Podstata with 77 points, but he is followed by Martin Sirotek from Entropiq and David Přáda, the other ERT driver. However, there will also be a number of newcomers or the returning Lubomir Moric.

Join us online on YouTube, Facebook, and Twitch (Proesport, Virtual GP and PLAYzoneUP). The race will also be broadcast by O2 TV Sport!