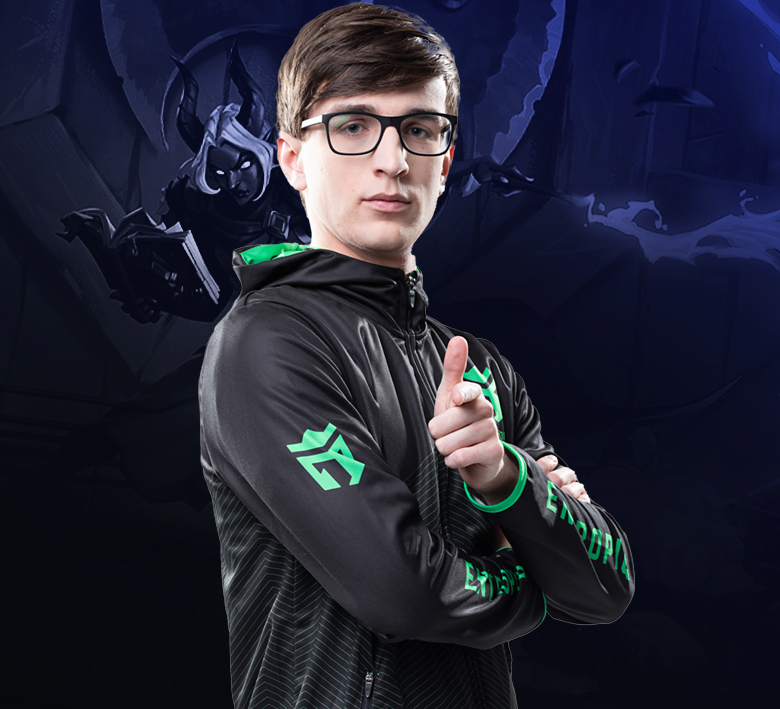 Six players returned to compete for the Championship on Sunday, including En1gma who was the last Entropiq player standing.

While En1gma lost his first match against Krajda, he would win the next three clashes to ascend to the top. The youngster emerged as the winner of the stacked tournament and went down in history as the 2020 national champ.

The final battle against Milan "M1lan" Šnajdr was a classic. En1gma quickly seized a 2-0 lead, but his opponent was able to tie the series and force the fifth game. The black-and-green family celebrated victory after En1gma's Demon Hunter sealed the deal.

How did you enjoy the Championship?

The National Championship was a great experience. I've played competitively for just over a year, and this was the first time I qualified. It didn't go as smoothly as the title might indicate.

I started both days with losses, against Martim and Krajda. I made a lot of mistakes in those matches, but I was able to stay calm after both of the defeats. Fortunately, the groups featured a double-elimination format, so those battles didn't force me out.

What was going through your mind after the opening defeat?

It was a pretty close series. After the match, I hoped that Faeli would beat him so that we wouldn't clash against each other in the decider. Both of us eventually made it through.

Having lost the first match, I was quite under pressure in the next games as I had to win both of them. However, as I said, I stayed relatively calm. Priest helped me beat davidek 3-0, and I tried the same in a rematch against Martim, and it worked out again.

In the semifinal, you were down 2-0 against Rybka. Did you believe you could turn it around?

I don't really think about it that way during the matches as it would only make me panic. I just try to play the best Hearthstone that I'm capable of. It's important to stay composed and play your best game in these high-pressure clutch situations.

Still, I was close to being knocked out. In the fourth game, I was almost sure I was going to lose against Roguna, but I snatched the win away from him.

Which series was the toughest for you?

I was lucky to play some fairly easy ones, particularly the sweeps with Priest. I think perhaps the Sunday clash against Krajda may be considered the toughest. We played before noon, I was still a little flat-footed and couldn't concentrate as much as I'd like to. I made one questionable decision with Mage, but it's generally really hard to play it perfectly.

In hindsight, would you change anything about your lineup?

It was fairly simple: which decks are the strongest in the current meta? Which ones I'm familiar with? Which ones to add? I figured it would be the best to ban Demon Hunter and I had counters for most of the other decks.

I think my lineup worked perfectly, I was a favorite ahead of most of the series. I would maybe add Illusion to Priest, so that I could beat the Mozaki Mages. But I'm not sure, maybe it would make my other matchups worse, so I think I'd leave it as it was. We had a great prep.

You had a dreamy start to the final. Was the win with Control Priest key to the victory?

It was important and then my Priest beat his Roguna. That gave me three attempts to beat his Druid, which I'd been a little afraid of. But I think the chances would be open even if I'd lost the opening game. I'd go for Demon Hunter, which would win quite often.

M1lan was down to his last life in the fourth game, but he made a comeback. What was going through your head at that point?

It was a crazy deck, I was quite scared because my lineup didn't play too well against it. Overall, Eclot's lineup targeted Priest, and I knew Malygos Druid was going to cause troubles. The game with Mage was really crazy. I had several chances to deliver the final blow, but I peeled a completely dead card twice. While I was just short of the win, fortunately, it wouldn't matter in the end...

Which was the moment when you believed you were going to hoist the cup?

Honestly, I felt pretty good ahead of Day 2. I felt I was one of the better players among the final six, so I thought I had a good chance to close it out. But it was the final Germination that really sealed it. You could see it on the stream, I knew I had a lethal...and that he really can't do anything about it.

The next stop is Paddock Masters in a few days. What are your plans for the next season?

I'm looking forward to the Paddock Masters. It will be the first big event featuring a new expansion. We will surely create some great lineups, so we should be favorites because Entropiq has a really strong deck building, perhaps the best in the country. Faeli and I will be preparing together, we're thinking of having a boot camp.

As for the next season, the goals are pretty clear. I want to qualify to the Czech Nationals again and try to become the first back-to-back champion...or at least I hope we'll keep the title in the team. Other than that, I want to qualify for every Masters Tour event and have success in those. Everyone wants to be a Grandmaster, but you need a lot of luck in the right moments, so we shall see...