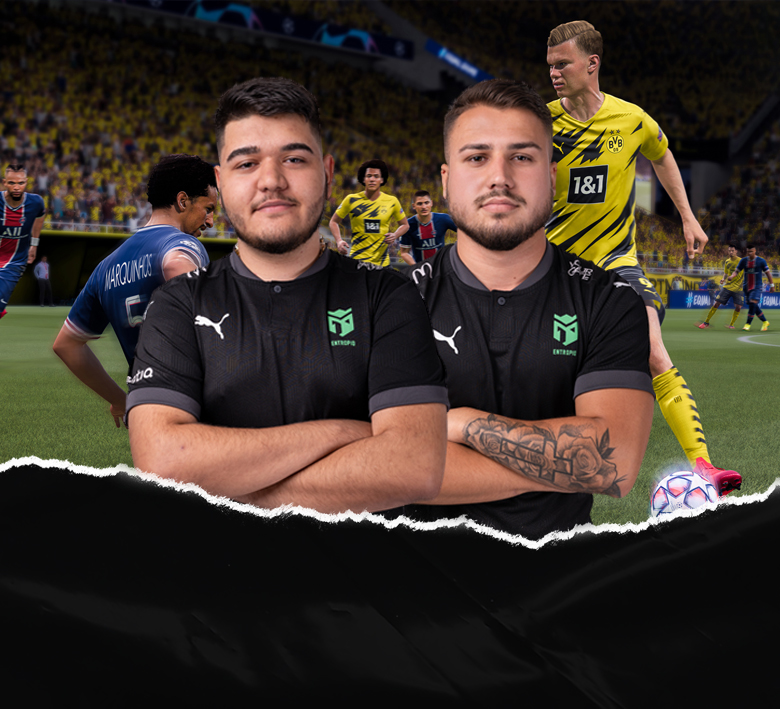 Matěj "Matejs" Dunka and Mario "MarioOooso" Gumbrešt are two new names in the Entropiq family. They are going to represent black and green colours in the virtual football simulator FIFA21. Matěj is transferring from Bohemians and Mario is coming from Sparta.

Before the upcoming Big Shock! Fifa Cool Cup and the anticipated WCSR 2021, however, a more than comparable replacement is coming to EIQ. The experienced Matejs with MarioOoso.

The former came to computer gaming very early on. "At the age of five, my brother and I were already playing games like Need for Speed, Call of Duty and GTA. But at the same time, we all played football in our home and FIFA was the obvious choice early on. I first got it for Christmas in about 2006. But I didn't start playing competitively until FIFA19, when I had a very bad knee injury and had too much free time," he says.

The other newcomer to our organisation has also been involved with Fifa for a long time. "When I was about seven years old, my friends and I used to play football outside a lot, one of them showed me Fifa at home, and later my parents bought a computer and FIFA09 was a must," MarioOoso says about his beginnings.

"It's quite simple. I've always respected the Entropiq organization and its players, plus I wanted to take my FIFA career to the next level and become a professional player, so I'm very happy that they chose me to be a member of this awesome group."

Both fighters have been at the top of the domestic CZSK scene in recent years. Dunka could be very well seen the international scene.

"Among my greatest achievements I count the EA Qualifier, which I finished with a score of 8-2, and I also played well in the Champions League Qualifier, where I was the only Czech player to make it through to the second day," he adds.

MarioOoso counters, he is even the CZSK record holder. "I managed to go 100-0 in the Weekend League, breaking the then record on the Czechoslovakian scene," he smiles. "I mustn't forget about winning the iSport League this year."

"Entropiq offered me great conditions to develop my gaming skills and also the opportunity to play FIFA full-time. My main goal is to successfully represent Entropiq in European tournaments. I would like to build on my current stable performance in the new Fifa."

Although important tournaments on home soil in FIFA21 are now still ahead of them, both fighters are already looking ahead to the new edition, which should appear as standard in the autumn. The unofficial release is tentatively announced for October 8.

"I will give my best to the new edition. I want to represent Entropiq in a good light," says Matejs. "We'll see what the developers come up with, but I wouldn't make any big changes other than blocking."

Mario is of a similar opinion. "The current FIFA21 suits me well enough gameplay-wise, so I'd like to see minimal changes in terms of gameplay style. But EA should definitely work on smoother and fairer gameplay and, most importantly, improve the servers so they don't crash," alluding to a traditional niggle with FIFA tournaments.

Players will make their first appearance in the new jerseys in FIFA21 this Saturday at Big Shock! Fifa Cool Cup, and in mid-July the 2021 WCSR kicks off, where they will be among the hot candidates for one of the medals. Good Luck!