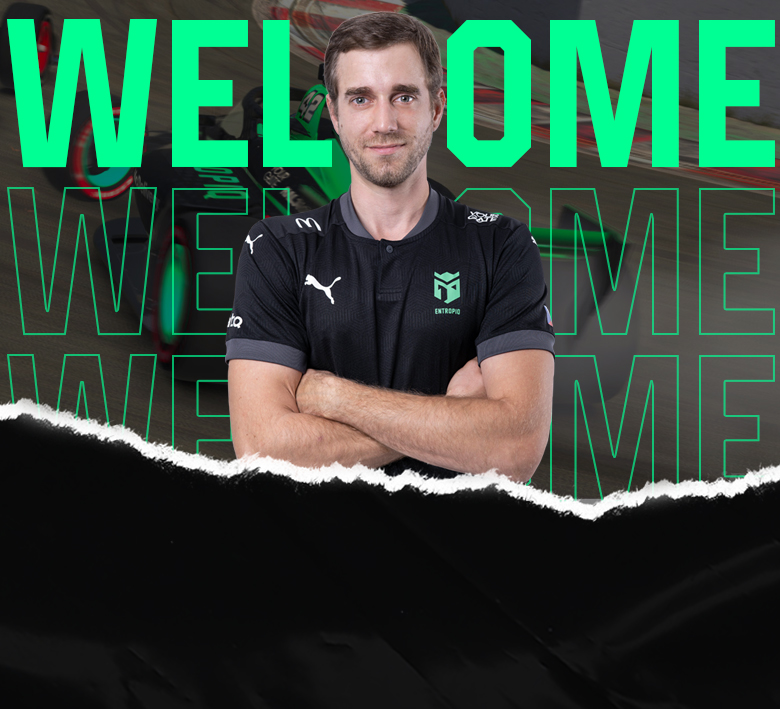 The Mercedes-Benz Virtual GP season is over and the first major reshuffle is taking place at Entropiq. Michal Matoušek is replaced in the sim racing division by Martin Sirotek, the third man of the VGP 2021 leaderboard.

We asked the new racer of our black and green colours a few inquisitive questions.

Hi Martin, let's start from the beginning. What is your gaming background, how did you get into sim racing?

I've been more or less involved in competitive gaming for a good 15 years now. It all started with Counter Strike 1.6. through W3:Dota to World of Warcraft PVP.

And then there were racing simulators...

I got into sim racing through an absolutely tragic performance in go-karting 12 years ago. The main goal was to learn how to drive in real life on a circuit. Now I can only confirm that it really helps and works.

So we can see you in a real race car from time to time?

Absolutely, I own a "tracktool" Honda Civic Type R modified to handle the circuits I visit a few times a year (see video).

Occasionally, I'll also take my sharp hobby kart out for a spin.

You race virtually on iRacing. Are you comfortable with their software?

I tried iRacing a few years ago and was simply sucked in. Mainly because of the professional approach and the desire to get as close to real racing as possible, whether in terms of graphics, physics or overall style of sharp racing.

I've had my license since 2014, and that's when I realized that this is the only sim racing software worth pursuing. Their method of development, attention to detail and overall approach is unique. Just their business model alone, where the game may seem expensive but in the end it's still the same game, the content I bought in 2015 still works today, is supported and constantly updated, which in my opinion is the main reason why they are nowadays outclassing all other competition at least in my eyes.

I personally own and have ridden practically every other sim racing game, and it's always the same, a new game comes out, there's hype, support slowly starts to wane, and the last year of its existence they've practically been developing the next installment of the game.

Like you said, you've been doing sims for 12 years. I guess you're hard to surprise after all these years?

For a long time I had virtually no extra results, but I have gathered a huge racing experience, learned to understand the issues perfectly, I know the FIA rules and a kind of aracing code, telemetry data, detailed chassis types, tyre directions, runs of different engine concepts, etc.

In time one starts to understand the psychology of the racers as well, which is also a very important component of a good driver.

All of this together allows me to concentrate almost exclusively on driving today.

What cars suit you best?

My specialty has always been mainly GT cars and that is still true. But I prefer long endurance races rather than short sprints.

When did you start taking esports really seriously?

On the Czech scene, I got serious about Counter Strike 1.6 around the age of 16 and 17. For a while after that, I was practically competing in World of Warcarft for two years straight at the world competitive PvP level.

Fourteen months ago, after a long hiatus, I figured I'd give it one more try, this time in virtual racing, and so far it's been successful.

What are your top achievements so far?

In iRacing and sim racing overall, participation in several world competitions. Over the last year with the biggest success of 5th place in the 24h eSports series in the GT4 class. In the past then in other games such as rank 1 world in WoW PvP season 7 as a retribution paladin.

What about the last season of Mercedes-Benz Virtual GP?

Aside from races where the car setup just didn't work or there were unnecessary collisions from opponents, I quite enjoyed VGP 2021. Considering the amount of other races I did outside of VGP 2021 during the season, I'll take a final third place as a solid acceptable result.

What was needed to make it even better?

Besides proper motivation and good teamwork, a stable race engineer who prepares the car perfectly for each race.

That comes with Entropiq?

I expect excellent cooperation including adequate support so that I can focus on the best possible results and overall sim racing performance including physical and mental fitness.

How doyou get on with your new teammate/co-driver Lukáš Podstata?

We've only known each other for a few months, but I think we've hit it off perfectly. We're similar age, we both have a lot of life experience, we share the same professional and intense approach, and most importantly, we both have the same goal to continuously improve and show our strength at the world level.

What are the next competitions coming up?

Starting on Sunday, 17 October, the Creventic 24h eSports series of endurance races in the Porsche 718 Cayman GT4 Clubsport MR will get underway.

What are your expectations and goals for the next 12 months?

I expect to see a visible improvement in my driving and racing abilities, especially with the professional team support from Entropiq and the perfect teammate. The main goal is stable competitive results on the world stage.