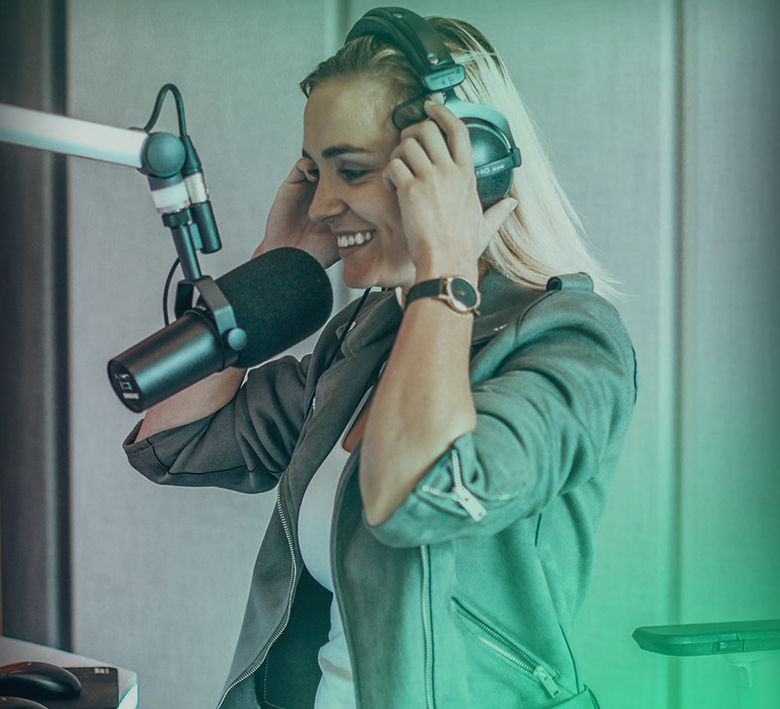 You’ll find not only the game players, the directors of the game sections, the coaches or the data analysts among members of the Team Entropiq. You will find there also people from media, that will regularly cover the team events and inform about the achievements of each individual player.

It may sound like a cliché, but my work is my hobby...

Entropiq: You may be the less-known face for the esports fans. Can you introduce yourself?

Bára Dvorská: Hi, my name is Bára Dvorská, I currently work as a presenter on the Fajn radio. I have there my own show called “A Fajn Evening” every day from 7 pm to 9 pm. Furthermore, I host different events, from conferences, graduation parties, musical premieres to the Muay Thai events. In 2018, I also worked for the Prima Cool TV in a program called “COOL feed”. Maybe you can remember me from there.

E: You seem to have a very busy schedule. Do you still have time for your hobbies?

BD: It may sound like a cliché, but my work is my hobby and I love it so much. I've always wanted to be a presenter and I'm glad I'm still getting new and new opportunities that allow me to explore different fields of human activities. I also like sports. I ride a wakeboard in the summer. Lately, I've even been able to combine my work with my hobbies, and I filmed the reports on the European wake parks in the summer.

E: What about esports? How do you like computer games?

BD: I have to admit that I don't understand esports very well. It's a new challenge for me. But I've always enjoyed computer games. My brother taught me some computer games, and we were able to play computer games for hours.

E: What did you spend your time on?

BD: I played various strategy games, but I can't even remember their names. Then I played some skateboarding game with Tony Hawk. I also played Zoo Tycoon and some similar games, where you build different cities. I really liked GTA, and I still like it. I played everything from GTA 3, San Andreas, to GTA 5, which I recently finished twice. :-) But I also like games like Assassin's Creed or Mortal Combat. Not a girly thing, I think.

E: Are you competitive?

BD: 100 %! I'm an extremely competitive person. I always say that I’m not, but I don’t like losing. At that moment, I'm like a little child, who wants to win at all costs... My friends and I sometimes play board games, and if I can't play the game well, then I'm almost not able to live with it. I'm trying to learn the game to win next time, or I think up another one, which I could win.

E: You host the Muay Thai evenings. How did you get to combat sports?

BD: I’ve been hosting Muay Thai for three seasons (years). I came to it by chance. I have graduated from the College of Media and Journalism. During practice, I was shooting one video that was posted on Facebook and the video happened to be discovered by the president of the Czech Muay Thai Association Petr Ottich, when he was looking for a PR specialist for his team.

He texted me if I'd like to try hosting the Muay Thai evenings. I had no experience with it at all, but it was a new challenge for me. I took it over after Robert Rosenberg, who had been doing it before, but he didn't have much time.

Every year from September to June, I host all league tournaments, gala evenings and also the Grand final of the Czech Championship (together with Petr Vágner), which usually takes place in the Olšanka Hotel.

My whole career has started thanks to the Muay Thai. I received a contact to the Prima TV at the Muay Thai event, and on TV, I was chosen to work in the radio station ... It means that Muay Thai is the cradle of my career, it's a great sport and I enjoy it a lot.

Almost everyone knew HS when I talked about the event with my friends.

E: Have you ever tried any training or sparring?

BD: I only tried boxing training as a part of one of the challenges on our radio, and it was hard as hell. I exercise, I do sports, but you have to engage different muscles here. It's very challenging. I've been promising to my Muay Thai friends for three years that I will go for training, but it hasn't worked out yet. But I'm not that type of person who likes to beat up girls in the ring, because it just hurts. I'm not saying that the wakeboarding doesn't hurt sometimes, but it hurts differently...

E: Could esports be compared with combat sports?

BD: Competitiveness is a common feature for both, esports and combat sports. You want to win. You want to be the best. You need a certain mindset when fighting/playing the game. You always need to have some tactic and adapt this tactic to your opponents. On the other hand, it’s incomparable in terms of physical demandingness, even though you have to sit in front of your computer for long hours. The path to the winning goal will be very different for each one.

E: Do you admire any presenter/reporter?

BD: Leoš Mareš is an example for all Czech presenters and he's great. He does his radio work with love, and that's the crucial thing about this craft. If you don't like it, people will see it and they will feel it negatively.

However, I don't really follow anyone. I like Zorka Hejdová and Adéla Banášová. Marek Eben is an excellent moderator. I didn’t like his taste of humour at first, but I have to say he is an improvisation master. When moderating the dance nights with Tereza Kostková, it's a pleasure to watch them. He's able to overcome all problems. The second most important thing for the presenter after loving your job is the ability to improvise.

I like Ellen, James Corden, Jimmy Fallon from abroad...

E: What is your dream as a presenter?

BD: I don’t have any specific dream. I enjoy the process of getting higher. I'd like to host bigger and bigger events, festivals, like Majáles for example. I'd like to go back to the TV station because you are not a famous face on the radio. For example, my current listeners are telling me that they think I'm a tall brunette, but I'm a little blonde :-). I would be happy if a few people could remember what I do look like...

E: Your first event with Entropiq will be a trip to Arlington with Faeli for the Hearthstone Masters Tour. What can we look forward to? What do you expect from the event?

BD: I really look forward to going there. I love the USA. I lived there for a year. It's like going back to my second home. Our whole team is going there - the cameraman, me and Faeli. We'll try to bring behind-the-scenes stories. Not only will we talk about the tournament, but it will be sort of a vlog trip focused on Faeli, the Masters, Texas... I'm happy for the opportunity and I'm going to capture the atmosphere of the Masters as much as possible in our videos. We hope we will do it the best we can.

We'll start right at the airport. I will report our meeting on the board, a taste of the American culture, our accommodation and the city. It will not be just about the Hearthstone. I am not sure yet, but I hope you will like it.

E: Have you ever try to play Hearthstone, or are you waiting for “training” from the Master of the Czech Republic during a long flight?

BD: I haven't tried it yet, but I've seen some videos, and I understand the principle. If Faeli doesn't want to prepare for the tournament on the plane, I will be happy to take advice from the Master.

Hearthstone is a very widespread game. Almost everyone knew HS when I talked about the event with my friends. My friends are dating geeks. They all play HS and love HS. I believe I'll get into it fast, but I'm just worried about not to become addicted to another game. When I fall in love with a game, I'm able to play every free minute, and I'm trying to avoid it. :-)