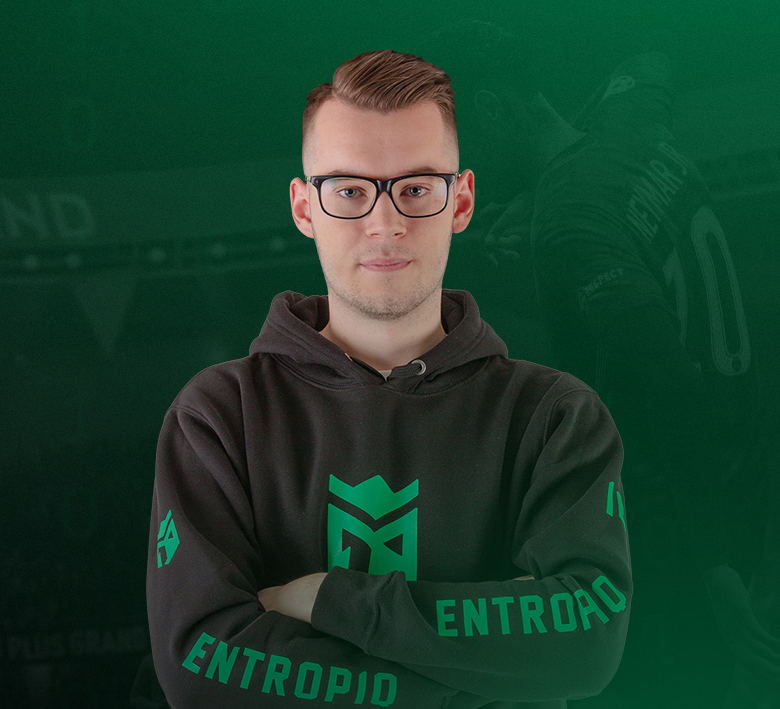 The second member of the FIFA division of the Entropiq esports team is another leading Czech virtual footballer, Patrik “Huhnak” Hornák.

Hornák has many great results, and in October 2018, he became the winner of the FIFA 19 Czech-Slovak Championship (MČSR), which took place at the “For Games” festival. He belongs among the best Czech players of this popular sports simulation for a long time. Will he be successful in Entropiq colors, too? We believe in that! We have a few questions for him.

What is your gaming history? Have you been always keen on sports games?

When I was young, my dad introduced me games of all kinds, and when I was three years old, I was already playing Crash Bandicoot. Over time, I played everything. The most I liked World of Warcraft.

I was always rather a competitive player, I wanted to beat others, so I mostly played PvP. For some time, I used to play League of Legends, CS, and COD. But I’ve always been missing a competitive level in there.

Most of my high school friends played FIFA. I didn’t like it at first, because I quit with football when I was 14 and I couldn't find my way back to it. But the need to beat someone, ideally my friends, was stronger :D

They'd all been playing FIFA for a while, so at start, I had a problem to get into it. But I trained a bit and soon I didn't have a competition.

Why not try a tournament? I started to play FUN tournaments, where you basically play for nothing. I had been winning often until I saw a Facebook qualification to V4 in Hungary.

I took time off work and gave it a chance. The qualification was extremely difficult, but I made it. In Hungary, it was my very first offline event in my life where I played against the pros.

I've been playing FIFA competitively for about three years.

When did you start taking it seriously?

I started to take it seriously after the successful V4 qualifier, where I partnered with the Alza Gaming, which is already cancelled.

You say you played real football. For how long?

I played football when I was 6 to about 14, but it never satisfied me. I'd rather watch games on TV :D

How did you get your nickname “Huhnak”?

I “stole” my dad's nickname, Huhna, but when I was creating an account on PlayStation, Huhna was already taken, so I tried Huhnak.

Who is your favourite FIFA 20 player?

It used to be CR7, but nowadays, the game has had great latency due to overloaded servers and Ronaldo doesn't have such a good dribbling, so I prefer Messi now.

What are your greatest achievements so far? What do you value the most?

I value the successful V4 Future Sports Festival qualification the most. I’d played FIFA only for a short time and I was able to beat seasoned players in that qualification. Then I also appreciate my win at the 2018 MČSR in FIFA 19 at “For Games” festival.

How many hours per day/week do you train?

It's 2-3 hours a day during the week, and not every day. Because of the weekend league, it’s double of it in the weekend, and it depends whether there are tournaments or not.

How do you prepare? Do you spend much time with theory (from where best to shoot, how to play corners, etc.) or are you preparing only by playing game itself?

In previous years, it was possible to win thanks to the theory. I've studied a lot of things that work.

There are no things to memorize this year. Every match is different. It's all about practice.

How do you think has FIFA evolved since you have been playing it (the game itself, the possibilities in esports)?

The game itself is getting worse. Unfortunately, each year brings more mistakes. I don't talk about graphics, I'm talking mainly about the gameplay. On the other hand, if one thinks about esports, the game has grown incredibly up. There are more tournaments and more prize money each year.

I like PlayStation. I’ve never had Xbox. In the Czech Republic, most tournaments are only on PlayStation, otherwise I would probably switch to Xbox because of FIFA.

Thanks for the interview and we wish you a lot of success in colors of Entropiq!