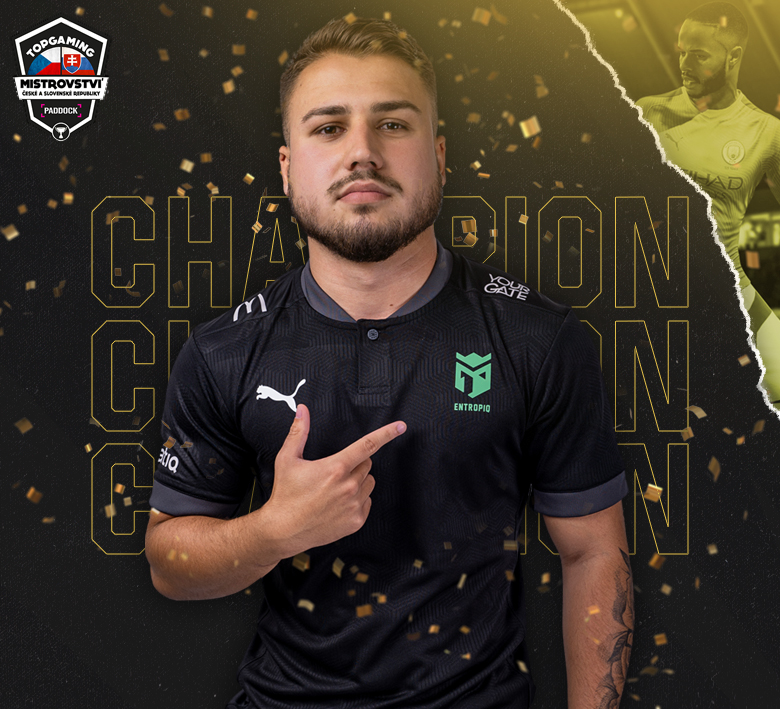 Entropiq have another domestic champion! After PUBG and Hearthstone, Mario "MarioOoso99" Gumbrešt got to the top in FIFA!

"Seron from Sampi is a big favourite and I think my Entropiq teammate Marioso could go far," said Matěj "Matejs" Dunka before the start of the final tournament of the FIFA21 Championship of the Czech Republic and Slovakia (MČSR) and he was very right.

While he didn't have his day and ended in the group stage in the 20-man championship, Mario was unstoppable on Sunday. He won all four of his matches in a strong group and performed similarly in the subsequent playoff.

In the quarter-finals, he beat Adulackek from Jablonec quite clearly (8:3), in the semi-finals he beat Slavia player Kobby (6:3) and in the matched final, our player defeated (5:3) FC MARTIN, until recently a Sigma Olomouc player.

In the grand final, Mario jumped out to an early 2-0 lead, but FC MARTIN managed to equalize and in the 33rd minute Chiesa even sent Martin into the lead.

The Entropiq representative pressed his opponent to his own sixteen, Ruud Gullit equalised and De Jong tipped the scales back to Mario's side with 10 minutes to play. Coutinho sealed the victory from the break.

"It was important that I kept a calm head when Martin turned it from 0-2 to 2-3, I didn't give up at all and it paid off. Together with winning the esport league, this is my biggest achievement to date, probably the most you can win in our country," commented Marioooso on his triumph.

"I always have big ambitions and I want to win every tournament, so definitely win!" he said before the tournament when asked what result he would be happy with.

So there is satisfaction both on the player side and on the side of the organisation, which only recently signed Marioos on a transfer from Sparta Prague.

In addition to the title and a beautiful trophy, MarioOoso also took a very decent prize of over $1,100 by local standards.