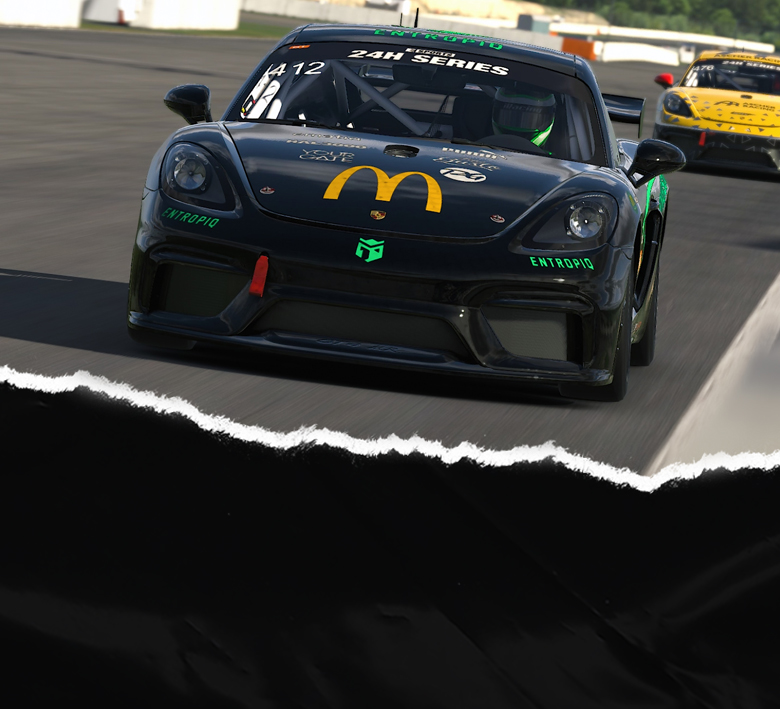 24H SERIES ESPORTS is a endurance series with strong international competition. Team will go through five 6-hour races and a 12-hour final. One car is shared amongs several drivers. Entropiq have Podstata and Sirotek.

Who's ready for another season of flat out endurance racing on @iRacing? We sure are!

After qualifying at Donnington Park, the season kicked off with a race at Hockenheimring in Germany. The black-and-green Entropiq's Porsche braved the waters on the front row.

A total of 55 teams took to the start line to battle for better place in four different categories (GT3,GT4, 992 and TCR). The track was often very tight.

The overall winner after 219 laps was the Spanish duo MSi eSports, who dominated both the entire race and the category of the strongest GT3 cars.

In the GT4 category, Entropiq came out on top in qualifying, and they they were fast during the race itself, but it didn't go that well for our colours.

The German crew SimRC gradually got to the front, the Entropiq drivers got involved in one uncaused collision and then due to one penalty they were not able to keep up with SimRC and fought for second place, where they also finished the race.

The season continues on 21 November with another six-hour race at Sebring, which will be complemented by a 24-hour marathon on the same weekend.

What do our drivers think about the start of the 24H SERIES ESPORTS?

How did the race go from the Entropiq crew's point of view?

We finished first in qualifying, which was an excellent result. However, the first hours of the race were very difficult, especially because of the intense and quite aggressive traffic.

Small contact from a GT3 car also resulted in a quick repair. On top of that, a short penalty for a common racing incident from our point of view. We dropped to fourth place. However, we gave it our best in the second half of the race and gradually worked our way back to second place with steady and fast driving.

Satisfied with the result?

Personally, I think our result is amazing in the highest category of world endurance racing.

Is the Hockenheimring one of your favourite tracks?

Although I have come to like the Hockenheimring more during training, I definitely don't consider it my favourite track. Those are yet to come later in the championship.

How did you get to grips with the car?

The Porsche 718 GT4 is probably my favourite car in virtual racing. I'm definitely used to the car. However, I still see aroom to use its 110% potential after the last update, which changed the tyres quite a lot and to some extent the behaviour of the car.

Is there any comparison with the VGP fleet?

The Porsche 718 GT4 is relatively close to the Mercedes AMG GT3. It's still a GT car, but it's more about mechanical grip rather than downforce.

After the first race, can you judge what positions you'll be fighting for throughout the season?

It's too early to make a full season prediction. Of course we will fight for the best possible position.

The first race ended with a perfect result.

How did the race go from the Entropiq crew's point of view?

The race went pretty well. We managed to beat the best teams in the world in the qualifier. We were a bit punished by traffic, but luckily we finished second, so a great result.

No, I'm not satisfied. Being second in the world is bad ;).

Is the Hockenheimring one of your favourite tracks?

Hockenheim is a nice track. I've trained there before so it suits me.

How did you get to grips with the car? Is there any comparison with the VGP (Mercedes/Dallara) fleet?

The car is fine, we know it from before. There are differences from the VGP cars, but a good racer can get used to anything.

After the first race, can you judge what positions you'll be fighting for throughout the season?

It's hard to say, it also depends on luck, but we've had a fantastic start.